Tidal Energy’s Effect on the Ecosystem 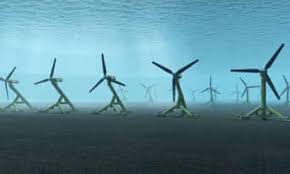 Tidal energy is the use of the kinetic energy from the rise and fall of the tide and waves, converting it to usable electrical energy. Because the invention of tidal energy is relatively new, its effects on the environment, to an extent, have not been taken into account.

Power plants used for generating tidal energy have affected the environment and the biodiversity around it through the deterrence of animals from the power plant, deaths of aquatic animals directly from the construction and functionality of the generator, and the long-lasting side effects that have indirectly killed animals.

Before tidal streams were used to host tidal power plants, they were mainly homes to millions of organisms, with their niches, ecosystems, and way of living. The presence of tidal energy generators has produced disrupting conditions for animals to continue living in. Deafening sounds and vibrations that come from the rotation of turbines, rile the water and push fish further and further away into places where they could escape the sounds of the turbines.

The generators have directly impacted the population of fish. In the river where the first tidal energy generator is located, La Rance, the population of fish like sand eels and plaice has decreased after the introduction of the generator. Installing the power plant, habitats of animals were destroyed, killing many in the process. Although time has passed, the power plant continues to decrease the population. Aquatic animals (fish, birds, and more) have been sliced and mutilated by turbines of generators.

As these power plants continue to be used, foundational characteristics of an ecosystem change. With the disruption of water flow, the velocity of the water as it passes through the generator rise. Due to the increased water velocity, the capacity of the stream increases, and more sediments are deposited. As a result, sediments create obstacles, limiting animals from moving. If levels of sediment reach too high, fishs’ gills become clogged, resulting in suffocation. Not only are animals affected, but vegetation as well.

Although tidal energy has sought its breakthrough in revolutionizing renewable energy, its effects on environments must be considered.