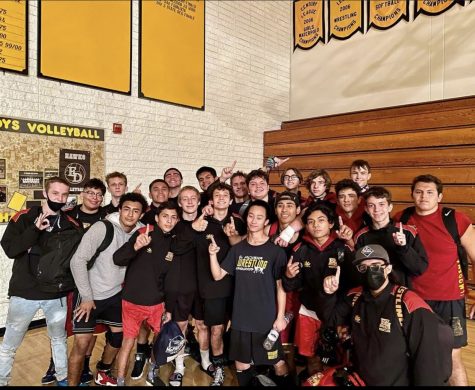 Our wrestlers are back to back leaders

Before last year the El Mo wrestling team didn’t win league for seven years straight, but now they’ve won league back to back! These wrestlers practice and wrestle hard year round with the sole purpose to get better than they were before.

Our El Mo wrestlers prepare throughout the whole week knowing each opponent isn’t going to be easy to brighten up their skill before the next dual. This goes from hard and disciplinary conditioning to wrestling at the end of every practice.

Due to the major events of 2020, we were all unsure if sports would be able to compete, but thankfully they did this year. Every athlete had to follow CDC protocols and take a COVID-19 test weekly.

Throughout the months of April and May, the El Mo wrestling team was victorious in duals against league opponents, but the team also lost some tough duals.

Whether it was a win or a loss for an individual wrestler there is always something to learn and improve on. The coaches made sure every wrestler improves and learns from past mistakes to not only better themselves, but to help the team.

Now that the wrestling team has won league, they are preparing for CIF duals in late May to bring a CIF dual meet title for the first time since 2014. Good luck!