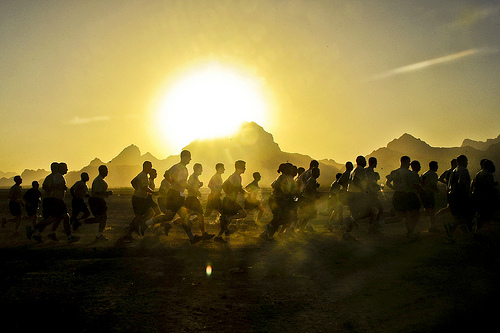 Runners take their final steps of the season

From the nerve-racking Laguna Hills race to the monstrous Mount SAC race, the El Modena Cross Country team has proven itself time and time again to be a team of immense spirit and confidence throughout the fall sports season. With league finals, however, they are tasked with overcoming their own boundaries and personal records so they have the opportunity to prove themselves in the race for the CIF championships. The race will be held on Tuesday, October 30th at Yorba Regional Park from 1:00 to 3:30 pm.

Despite more than a few losses, the team has been focused on what any good team should be focused on: improvement. Runners Eli Foyle and Joey Machado both say that the whole season was hard fought and maximum effort was made by each and every one of their teammates. “The entire team improved as a whole this year,” says Machado, “with almost everyone beating their old run times.”

“But will this improvement be enough?” is the current thought on the forefront everyone’s mind as league finals approach. The team as a whole is far from title-holding champions but many have faith that those determined to triumph will be the ones who get their shot at CIF. “…It’s going to take everyone pushing hard at finals for us to make CIF,” varsity runner Blake Hanson remarks.

Like all the others this race will be long, arduous, and exhausting, but one thing is clear: no matter what the outcome may be, the Cross Country team will remain a family bonded through the trials and tribulations of the season and will always keep their feet moving.