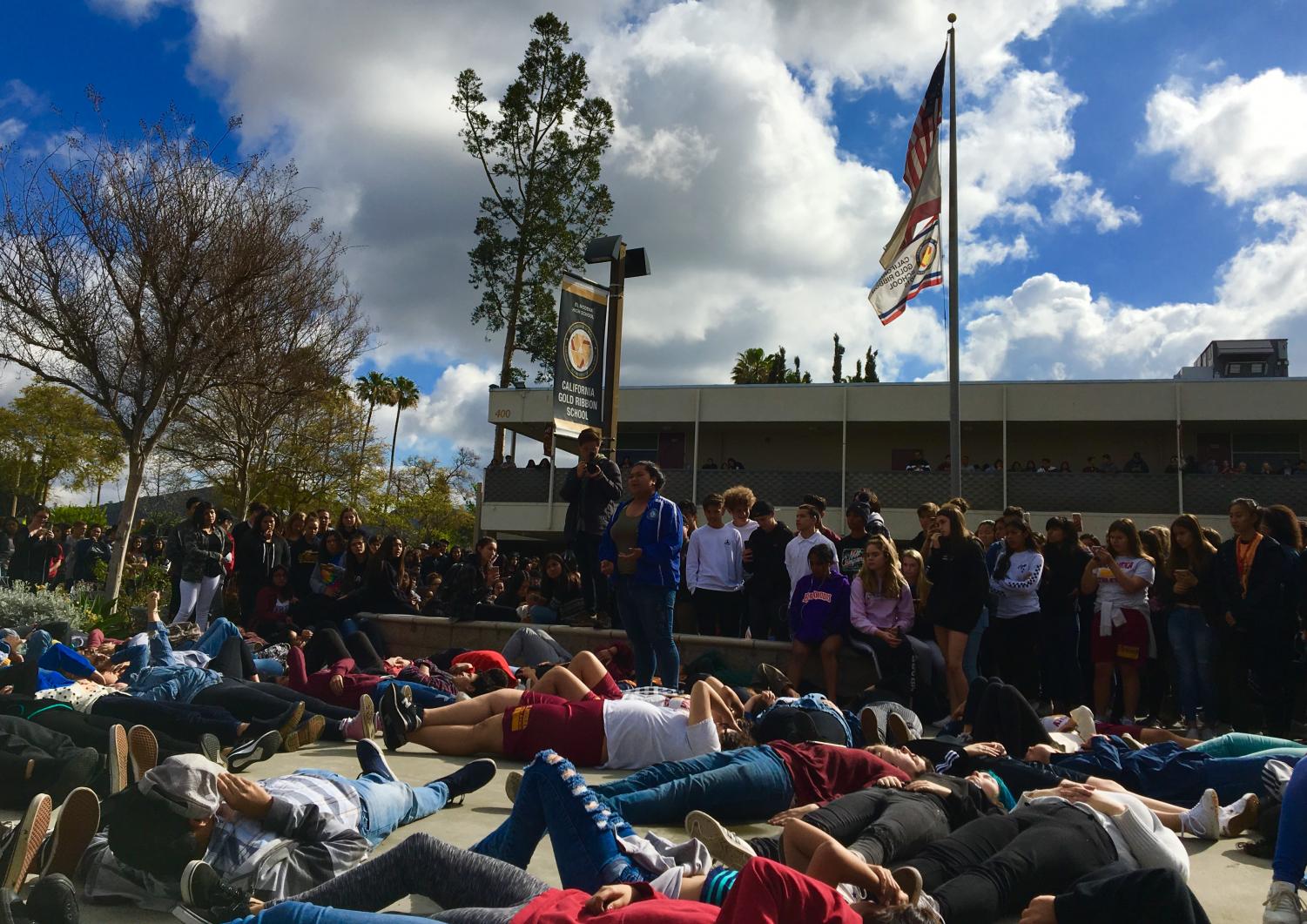 Walk Out, Lie In

El Modena’s participation in a school walk-out, in wake of a school shooting era

At 10:00 AM on March 14, 2018, El Modena students left their second period classes and participated in the National School Walk-out.

An act directly motivated by the students of Marjory Stoneman Douglas High School in Parkland, Florida, whom survived a school shooting one month prior, that killed 17 students and staff.

Corson, “hugely inspired” by Parkland student-activists, created a graphic image urging students to, “meet in front of the office and stage a 17 minute ‘die-in,’” featuring the hashtags, “#NeverAgain #ENOUGH.”

In the midst of the walk-out, junior, Ilaise Tamotuu, who previously lay, bravely stood up and used only her loud voice to orate a two minute candid speech. Tamotuu began “I know some of you are here because you think it’s a joke, it’s not a joke.”

She continued saying “we are here remembering innocent people killed in the (Parkland) shooting,” she proceeded advocating for gun control, “we are tired of the violence, we want stricter laws on (gun control), we want our voice to be heard.”

Numerous students solely attended to have a break from class, others because their friends did, and a thousand other students chose to stay in class.

Many students who didn’t participate did not apprehend the walk-out’s purpose; to advise for gun control or to remember students killed in school shootings, particularly Parkland.

Students took to twitter to voice their opinion, where many including senior, Alyssa Barraza defended the walk-out and perceived the purpose as honoring lost student’s lives.

Students also tweeted in confusion, and against the walk-out, rather seeing it as a protest against gun control, including senior, Jack Thobe.

Villa Park High School also walked out, and many students interpreted the walk-out as a gun control protest, and reacted by waving Trump banners.

One Villa Park student grew infamous on twitter for wearing a shirt reading, “Make our guns illegal, and we’ll just call them ‘undocumented.’” El Modena and thousands of high schools, nevertheless, peacefully made their voices heard on March 14.