Forever the Voice of El Modena

Bob Ruddy shares his thoughts and memories from announcing but most importantly, his voice 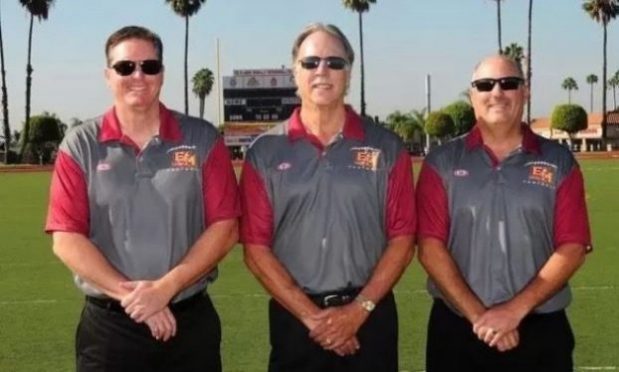 Bob Ruddy is an iconic name on the El Mo campus. Ruddy began announcing in 1995 and his love for the microphone is leading him into his 23rd year as “The Voice of El Modena.”

Ruddy is most known for announcing the varsity football games, his pristine voice has been heard throughout Fred Kelly for two decades. He also announces varsity basketball and varsity baseball games. Many other sports programs at El Mo have him emcee special events.

His sons played baseball and football at El Mo, Anthony Class of 2000 and Bubba Class of 2004. One of his favorite memories was being able to announce his sons games. He has also stayed active with the program after finishing a term as booster club president for three years.

As the owner of a Farmers Insurance Agency in Tustin, Ruddy operates the Farmers Insurance Community Sponsorship program and commonly donates towards programs at El Mo. Aside from being an insurance agent, Ruddy also served in the US Army Military Police Corps.

Ruddy doesn’t show it, but announcing requires a lot of preparation. “I write out a script for the game and research pertinent information for that game.” Alongside his spotters they arrive hours early to every game to prepare lineups and practice pronunciations.

Another favorite memory of his is saying, “Good Enough for an El Modena… and the crowd yells ‘First down!’ “I practice that on game days around the house, it drives my wife Cathy nuts!”

Support from Cathy keeps him going, she says “Bob hasn’t found a microphone he hasn’t liked yet!”

With 22 years of being at the helm of Fred Kelly, Ruddy has certain aspects of the game that he most enjoys. “ I have the best seat in the house and I like to make sure the crowd enjoys themselves, so I add a little humor to my announcing.”

Ruddy would like to thank the spotters he works with for football, Bob Doerr and Scott Carroll. Through his community involvement and dedication to El Mo, Ruddy certainly exemplifies himself as a great public figure for the El Modena Community.