Julia the Muppet: Autism and Acceptance

“Sesame Street” introduces Julia, a muppet with autism, to teach children acceptance of those with mental and behavioral differences 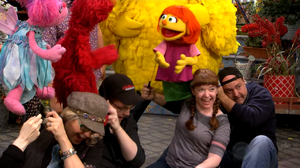 Julia and her puppeteer, Stacey Gordon, during filming of the forty-seventh season of "Sesame Street" (Photo via Wikia).

“It’s just that Julia has autism. So sometimes it takes her a little longer to do things.” Elmo tells Big Bird as he educates his friend on the proper interaction with children with autism by creating acceptance of those with diverse mental and behavioral differences.

Julia the Muppet is a character in the 2015 online storybook “We’re Amazing, 1, 2, 3!” and made her television debut on for the 47th season of “Sesame Street” in April 2017 during Autism Awareness Month.

Stacey Gordon, the puppeteer behind Julia, brings the character to life through experience of raising a son with autism. Gordon hopes to create lessons that demonstrate healthy interactions with children with autism as depicted by Muppets such as Elmo and Abby.

The lack of of characters with mental and behavioral differences on children’s programming has left families, such as Gordon’s, with an insufficient platform to educate the public and demonstrate the importance of acceptance of all individuals regardless of their differences. That was until “Sesame Street” took a stand.

During the “Sesame Street” skit, Big Bird’s initial reaction to Julia with her quiet and aloof nature, lack of eye contact, and flapping arms was unsettling to Big Bird until Elmo explained that Julia was exhibiting characteristics associated with autism; knowledge given to Elmo by his father.

Elmo demonstrates to Big Bird a healthy interaction by engaging Julia in a game of hide-and-go-seek and peek-a-boo with stuffed animals. Leaving the two, “smiley [and] curious,” friends who defy titles.