The Paradox of Hypocritical Thought

Theories regarding hypocrisy and the different types of hypocrisy 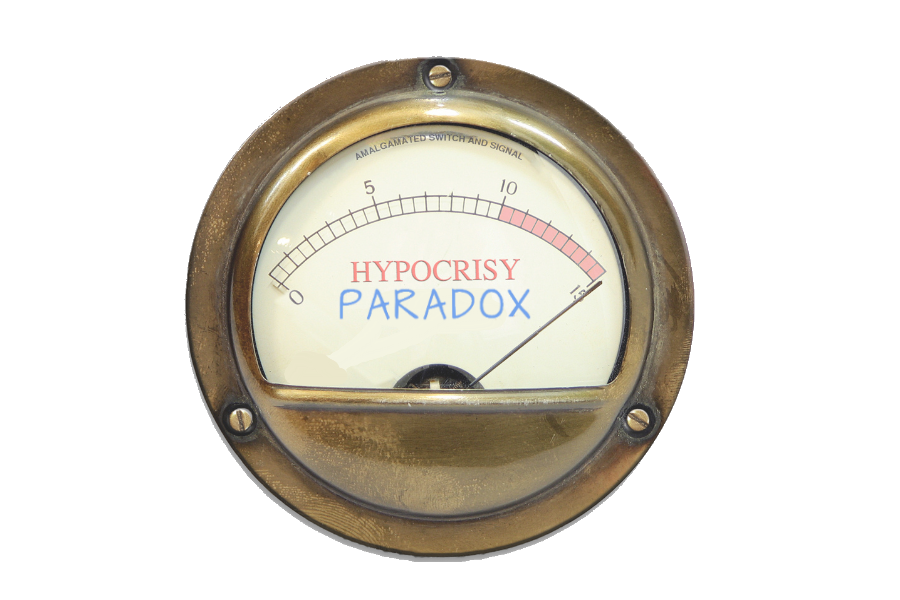 In Islam, there is an idea called nifāq. Nifāq is a type of hypocrisy shown in the munafiqun which are a group of Muslims who were said to be unsympathetic towards the cause of Muslims. Outlined in Sahih al-Bukhari, one of the most important books for Sunni Muslims, “The prophet Muhammad said: ‘The signs of a hypocrite are three:

Whenever he speaks, he tells a lie.
Whenever he promises, he always breaks it (his promise).
If you trust him, he proves to be dishonest. (If you keep something as a trust with him, he will not return it.)’”

But is the hypocrite aware of their lies, their broken promises, or their lack of two-way trust?

The ‘intentional hypocrite’ defies their existing beliefs, ideas and values and knows they are consciously or have a complete lack of values to defy and this is an unforgivable action. There is a quote of  William Hazlitt that goes “The only vice that cannot be forgiven is hypocrisy. The repentance of a hypocrite is itself hypocrisy.” If I were to elaborate upon this concept it means that if one apologizes for being a hypocrite then they further this assertion that they are a hypocrite and that is practically impossible to forgive, because they are unable to escape this circular hypocrisy.

Hypocrisy is good when authentic, because it identifies a truly genuine person someone who has no control over the fact that they are a hypocrite, they stay true to themselves. While hypocritical hypocrites displays ingenuity and are people who should not be trusted for they are the people who defy themselves and don’t trust themselves the most. Although, hypocrisy has a tendency to be contained within ideology and perspective. In other words, the recognition of someone as a hypocrite is a burden to be bear upon the person or persons who recognize the culprit of hypocritical action(s).

Edward Burke recognized authentic hypocrisy. He has a quote stating, “Hypocrisy can afford to be magnificent in its promises, for never intending to go beyond promise, it costs nothing.” Arthur Schopenhauer connected the ideas of modesty and authentic hypocrisy by stating, “With people of limited ability, modesty is merely honesty. But with those who possess great talent, it is hypocrisy.”

Many extremely intelligent writers such as Michael Gerson recognize that without hypocrisy in either form, there are no ideals to be upheld.  Without lies, there is no standard of truth. Without broken promises, there is no promise at all, there is no trust to be had. Without your trust being betrayed, there is no risk for trust.

Hypocrisy is what makes us human and it creates standards and ideals. Hypocrisy is one of the most important parts of society, because it supports the occurrence of change and separates people into recognizable ‘good’ and ‘bad’ groups.